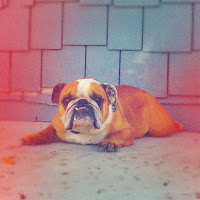 Not the right season for it, but this post is all about love.  The Greeks call it agape.  Carolyn and I did a Korean mandu run on our lunch hour and passed the "Agape Preschool" on Olympic on the way back.  Simple, imbecilic me was like, "Agape?  What's that all about?  Well the two children on the banner are gasping, so I guess they're all agape, that makes sense."  The more profound and intellectual Carolyn said, "I think it's love, in Greek."  "Huh?" was my response.  (A not infrequent reaction where I'm concerned.)

And sure enough, a quick Wiki of the matter revealed that agape is love and Carolyn went on to recite the various kinds of love, Hellenistically speaking:

Clyde Hendrick and Susan Hendrick of Texas Tech University expanded on this theory in the mid-1980s with their extensive research on what they called "love styles". They have found that men tend to be more ludic, whereas women tend to be storgic and pragmatic. Mania is often the first love style teenagers display. Relationships based on similar love styles were found to last longer. People often look for people with the same love style as themselves for a relationship. These styles are akin to the Greek types of love.

Oh, doesn't it all make perfect sense now!  I wish I had known these love styles from my first inkling of "love," it would have streamlined the matter so much more, if I were able to say, "Oh, this is not pragma, this is ludus!  No, it's mania!"  And would have moved on in much more efficient fashion.  Yes, I've known plenty of ludics in my day.

Today's comment on love also goes out to a dog I knew, for whom I certainly felt an agape.  He was a sweet little thing, English by bloodline and 100% heart.  He was 7.  I'm sending a peppermint up to doggie heaven.
Posted by Lucy Sloan at 4:31 PM No comments:

I am lately obsessed with vintage chairs.  I'm on the hunt for vintage dining room chairs to replace the sad IKEA ones I've been resignedly using for the past four years.  I hit up the yard sale of a stager this past weekend and was all kinds of inspired.  Beyond some great bargains, I left with a few tips, one of which is using Etsy as a resource for vintage finds, much cleaner and more streamlined than fleamarkets, Craig's List, or secondhand furniture shops.  The idea that I can get four chairs for $140, already repainted and upholstered with a vibrant pattern, is infinitely more appealing than saving up to get four vanilla ones from West Elm.  I just have to ask the important questions now: how modern do I want to go?  Mid-mod like Saarinen or sleek contemporary like Starck?  And remind myself, avoid shabby chic at all costs.  Not as easy as you think; the attractive French countryside and American farmhouse looks, all so "heritage" (as Carolyn likes to say) is maybe one whitewash away from coming out of Rachel Ashwell's warehouse in China.

The weekend ahead is, per usual, part social, part family.  Girls' night out at The Grove to watch Pitch Perfect and eat at the Farmers Market.  I made sure to have some kind of Halloween plans on Saturday, if only to relish the last years of being able to dress like a skanky [insert occupation, superhero, animal, or popular character here].  This year I'm down in Hermosa Beach, not a traditionally fecund place for meeting people of my age group.  Sunday is going home to meet some cousin in from China.  (Will she have that funny accent?) 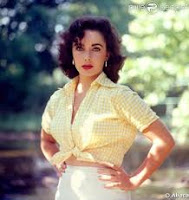 I'm aware today that one of our support center staff is peeved with me.  I'm making him turn like 2,000 e-mails into PDFs for a document production.  I gave him one of those fake, inadequate smiles of "thank you..." blended with the teardrop eyes of "I'm sorry..." but he just took the jump drive and left.  These kinds of office dynamics amuse me.  I mean, we both know it has to get done, but we actually entertained that polite conspiracy of "is there any other way to do it?" on the slim chance that maybe he wouldn't have to.  I'm convinced that all life is a comedy of manners.


And here is Elizabeth Taylor, that wondrous child-woman of ethereal, perfect beauty.  Richard Burton was so madly in love with her, though they were self-medicated for most of their years together.  It cracks me up that, in his diary, he wrote about a fight they had where he heckled her about being fascinated by Warren Beatty's penchant for older women.  "I like to gossip," she told him, and Dick had nothing to worry about.  "Christ if you can marry Eddie Fisher you can marry anybody!" he snarled.  I think the jealousy is kind of cute.  (And high five to Debbie Reynolds!)
Posted by Lucy Sloan at 12:21 PM No comments:

Much Ado About Mulberry 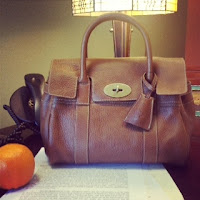 The Bayswater small satchel in Oak arrived this afternoon, a present from my mother.  We sat together at a coffee house two weekends ago poring over all the lovely leather on the Mulberry site, and she generously offered to make a wish come true by sponsoring my ownership of this bag.  This was also meant to be her soft introduction to Mulberry, because if she likes what she sees, she'll invest in a cross-body Bayswater herself.

However, the unveiling of the bag was not without conflict.  My office is flanked by those of two pretty fashionable co-workers, and we immediately set about analyzing if this bag was a keeper.  We ran various diagnostics: how does it look as a cross-body? hung on a wrist? in tandem with a workbag? walking down the hall? simulated at brunch? standing idly at a bus stop? brought to a child's first birthday party? running down the hall in the courthouse? posing on a deserted corner as if being photographed for a fashion blog?  Basically, all the situations one goes through in life.  And their firm, unwavering conclusion was: it's too small.  What's $200 more, they said, return this ish and for a bit more, get the proper Bayswater, in the traditional size more like a Birkin or Kelly.

It's weird, right.  Online shopping is no different from online dating.  Or even a celebrity sighting.  It's just different in person.  In this case, smaller.  Not what I thought.

But, co-worker Audrey ("I don't know how she does it") came to the rescue when she promptly sent two critical photos.  One was of this lovely bag slung on the shoulder of none other than Nicole Richie.  Another was a fashion model posing - where else? - on a deserted corner probably being photographed for a fashion blog.  That was pretty much all the convincing I needed.  Thank God I don't have to repack this crap.

(On closer inspection, Nicole may have been wearing the Alexa... but whatever.  I'm committed.)
Posted by Lucy Sloan at 4:52 PM No comments: 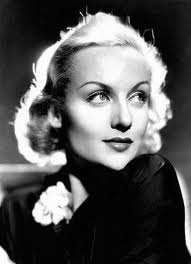 This used to be my playground.  No, seriously.  I used to occupy the "blogsdestroylives" blogspace, and then my blog destroyed my life, so I took it down.  I then kicked myself for picking such a prophetic address.  I spent one second trying to decide if I was clever or not, then concluded that I felt too miserable to be clever.  That was four years ago.

Four years later, I'm like, "Oh, that."  Loss of brain cells and general ADHD has made me marginalize that 2008 episode.  And oddly enough, reminisce, oh my gosh, I loved that blog address.  Because it's so true!  But so what?  It's also funny, and funny always beats true.

Oh, and this is Carole Lombard, because she has stunning bone structure, had a charming way of speaking, was the doyenne of screwball comedies, shot guns with Clark Gable, and swore like a sailor.  All that, and born Jane Peters from Fort Wayne, Indiana.
Posted by Lucy Sloan at 5:06 PM No comments:

Jef's and Emily's next tweets